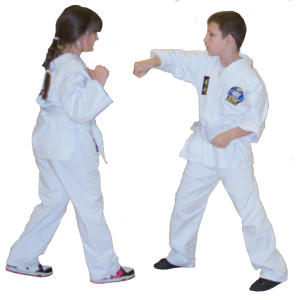 Many martial arts today focus upon Sparing with the aim of their students entering into Competitions, whilst it can be beneficial as a sport in self-defence we rely upon instinct if you train to score points then when you are under threat you will just try to score points. But sparing can be a good thing as long as it is conducted in a controlled manner, in Choi Kwang Do we refer to these as our defence drills.

In a defence drill we slowly introduce the student to more varied forms of attack and ways to defend against those attacks, starting with new students we have a no-contact policy where the emphasis is based upon stance, making sure the feet are in the right place to produce maximum effect with any block or strike, we then partner them up with an opponent in front so they can practice moving and keeping a distance from an attacker.

Once the student has Graded to the next belt level, or for some of the ungraded students that we feel are ready for it we move up to the next level which is closer in and considered as “light contact”. At this level the emphasis is upon the fact that all students who train are our friends and we are not here to hurt them and the same follows for this defence drill, one person is going to be the attacker and the other person is going to defend and in doing so will move in a straight line and slowly across the hall and then back again with the roles reversed, the person attacking with punch gently in the air towards their partner and the one defending will then gently block these punches, done over time this will program the brain to react to an attack and the muscles will react without the mind needing to think.

As the student progress up through the belts, the drills will become more realistic with free movement, more simulated attack methods, multiple attackers and also defending against weapons.

The fact that the emphasis for the students is upon helping one another rather than hurting one another the student is learning to be kind and respectful to others, they are also learning self-control which as they are learning how to punch and kick with a great deal of power they need self-control to ensure they do not harm anyone unintentional and to only use what they learn to defend themselves.